The Story Behind ‘Sauce Gone Wild’ 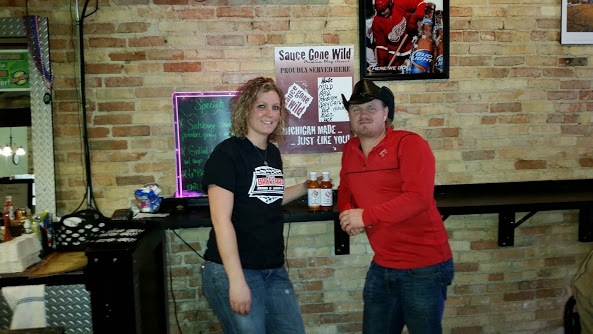 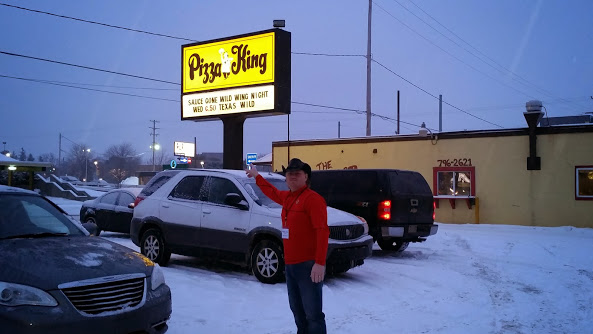 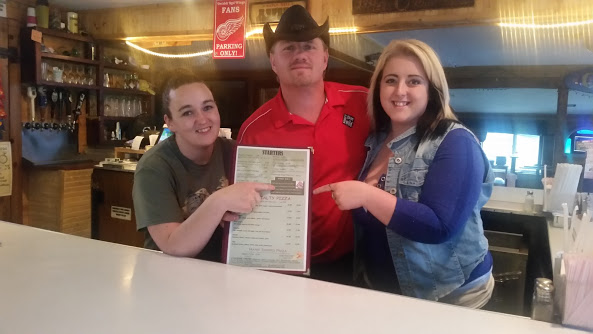 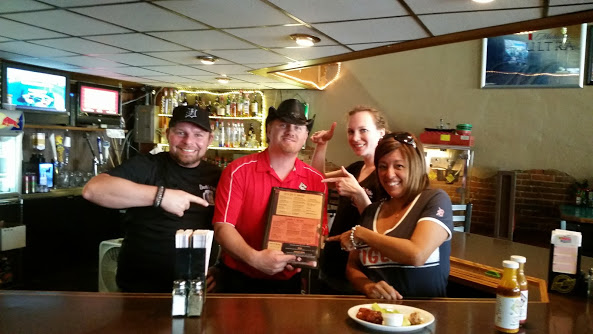 We recently conducted an email interview with local entrepreneur Randall "Tex" Lockwood, the owner, founder and self-described "Chief Wing Man" of Sauce Gone WILD LLC. The questions were originally asked as background questions for an article I was planning on writing, but after reading and re-reading reading the answers, I didn’t feel I could do the story justice. I feel that the answers straight from Tex’s mouth give readers a great idea of the true story behind Sauce Gone Wild.

The Portland Beacon (TPB): Tell Portand who Randall “TEX” Lockwood is, and were you always TEX?

Randall “Tex” Lockwood (RTL): No, I started out as Randy LOL. I grew up in a small mid-Michigan town. Smaller than Portland. Ovid, Michigan is where I was raised. I lived there playing ball for the Marauders, hangin’ around town at Main Street Pizza, and playin’ guitar in high school rock bands. I went to Ferris State for four years and after college, I moved to Kalamazoo, where my future wife (whom I met IN OVID strangely enough) lived at the time as she was attending Western Michigan University. We then married and looked to start having children and for a good place to raise them back towards the home town. We found the beautiful countryside of Portland, and built our “nest” here. The TEX name didn’t come until later, on a college spring break trip to Texas, (that is ALL of the details I will give you lol) and the name just stuck with me. So now, years later, I had a friend say, as I was starting SGW, that I am now “Texas WILD”, and so then, I guess the Sauce Gone Wild company had its front man: Randall “TEXAS” Wild. Lol. It’s silly but, the name really helps people remember me when I am out workin’ at food shows or bars. But make no mistake, “Tex” is pretty much me- just ask my wife, two kids, or anyone who knows me… like it or not… it’s kinda who I really am lol.

TPB: What gave you the idea to start making sauces in the first place?

RTL: As I like to chuckle and say, the idea for the company was born out of "desperation and motivation". While having the typical 40-year-old mid-life crisis, I lost my position in a tech company (that I took shortly after dissolving my own tech business), just when the mortgage crisis was hitting around 2008. At that time things were pretty tough for a lot of Americans economically. As a result, a lot of the local bars and restaurants that we frequented for a little fun and escape, were sadly closing their doors. I decided to start a wing night at one of my favorite local taverns and see if we could help them get people to come up. They didn't have any sauces so I decided that we would just use some of ours. We had several that we have made for years that we would give to the neighbors and such. We started doing "sauce gone wild wing nights" up there and it was a hit. We then added several flavors to give it a “bigger” kind of feel. it was a big hit and a lot of fun and I was happy that we helped the establishment get more traffic through the doors. I then took the idea to several other small-town bars and it worked equally as well there, helping them get people to come in and spend some money in a tough time. Then I realized we had something unique and something that people needed. With no one really hiring at that time, that's how the company was born and we decided to roll with it and really see if it could support our income.

TPB: What did you do for a living before this?

RTL: I went to school at Ferris State University studying advertising from 1987 to 1992. I then started my career in copywriting and didn't really like the atmosphere at the agency level, and alternatively went into sales. I basically have always been in sales for other companies, and then I started a tech company of my own around 2001. It evolved into a security company as I took in a couple partners, then years later, I dissolved it during the mortgage crisis recession, taking a job selling for a competitor of mine. TPB: What is the story behind the name?

RTL: Really the name just started because we were trying to come up with something sexy, different, and fun and I really didn't want my own name as the brand. There are enough sauces made by enough people who think they need to put their name on the bottle because it's "theirs". Sauce Gone Wild was never about "me", it was about the people who enjoy it, and about inspiring them to go out, stay positive, reinvent themselves, take some wild risks during that tough time especially, and just enjoy their lives to the fullest. We thought the name "sauce gone wild" really spoke to those people that we wanted using our products. TPB: When did you start?

RTL: The company started conceptually right after the mortgage crisis around 2009. It took a couple more years to get the legal part done, regulations, logos, labeling, supplier sourcing, etc., and most importantly a really good co-packer that was willing to work with us that we could count on. Without someone to make your product for you to your specifications, and to put up with you, while you are obsessed with your quality and appearance, you have nothing but a dream. The key is to find someone that is willing to help you and listen to you. TPB: Where are your sauces manufactured today?

RTL: Our sauces are made in Saranac Michigan. They are also made in Chicago, Illinois for some grocery distribution in the Midwest. TPB: How do you distribute your product?

RTL: We use several distribution channels. We are using our partners at Sysco Foods Grand Rapids, Michigan, who were the first to give us a shot. We have developed a great working relationship together and they and their reps have really helped us build the company. As customers demanded our products in other markets, we have also added Van Eerden Foods to help with eastern Michigan, and Greco Distributing out of Chicago, Illinois to start a Midwest push. We also use US Foods, and Sysco Hampton Roads Virginia for some Southeastern United States distribution that we are trying to get going. TPB: How many employees do you have?

RTL: Our model does not really support employee or brick-and-mortar type techniques at this time. All of our efforts are subcontracted out to people who make the sauce, sell the sauce, and distribute the sauce, etc. I also have accountants and lawyers who handle this aspects as subcontractors, per se. I do a lot of corporate selling at the executive level now, but also still love to go out and visit local restaurants/ bars, and demo the sauces. I do a lot of food shows and personal appearances as "Texas Wild" at sports bars, and larger venues such as Casinos and sporting events. TPB: How many restaurants are using your sauces today?

RTL: That's a good question. Since we don't sell direct and we use distributor, I only have a ballpark idea. I would say hundreds to be safe but I really have no idea. It changes every day as the distribution sales staff keeps building our client List. Since we took 1st place (and 2nd and 4th) in MLive’s Best Wings in Michigan (Lansing area division) survey from wing enthusiasts this summer, we have been adding restaurants and bars to our customer list at a furious pace. We are even sold in places like schools, such as Portland High School, at stadiums like Van Andel Arena, and at Motor City Casino, just to name a few. The recognition was great for getting the word out to Michigan bar and restaurant owners, that if needed, Sauce Gone Wild can really help them take their wings from good to GREAT while also giving their customers something unique and different than the typical big name national stuff that’s been around forever. And, since its MICHIGAN MADE, that’s a nice plus, allowing them to show their customers they care about local people, just like them. TPB: Where can people buy your sauces?

RTL: People can buy our sauces locally in the Portland area at Tom's Food Center. Those are the 12-oz. home use retail bottles. Soon the world will be able to get our bottles on Amazon.com. We also sell them on our Facebook page at www.facebook.com/SauceGoneWild . We have just gotten distribution for retail grocery with D & B distribution out of the Detroit area. So, they are launching our products right now in grocery stores. We haven't really tried the grocery channel before although we were in Meijer in the ‘Made in Michigan’ section for about a year, back a couple of years ago. It was a special program to give some attention to local suppliers. So now we are officially launching in grocery. I do know that we are now in Busch's markets in the Detroit area and we are just launching in Ken's Fruit markets in the Grand Rapids area, and have a meeting scheduled with Spartan Stores in November, so you may see us on many of those shelves soon. But we always have concentrated on the food service side more than retail grocery. That’s changing as demand for our Sauce Gone Wild home use bottles have started to increase. TPB: What is the most popular flavor?

RTL: That's a tough one. I would have to say spicy garlic, but garlic parmesan and hickory honey mustard are right there with it. So is the Asian sweet chili, tangy chipotle BBQ, and all of our buffalo flavors (mild, medium, hot, and xxxtra hot) run pretty close to the same as well. They all sell pretty evenly to be honest. But I would say spicy garlic is the number one seller TPB: Any new flavors in the works?

RTL: We do have two new flavors ready to go but we will need to get distribution to approve of more SKUs. They have been ready for a while but distributors need to find room for more products as they are asked to create space in their warehouse all of the time. We should probably keep those new flavors a secret at this time, but if you see me out and about doing some appearances in the local taverns, I just MIGHT have some on hand for fans to try. They are ALWAYS your best indicator of future success or vice versa lol. TPB: Anything else you would like to share about your business?

RTL: I would really just like to thank all of the people who have given this little company a shot out there. From Farmers Tavern who gave us our first shot to serve them to locals in a small town, all the way to the big city with Van Andel Arena and Motor City Casino. Without their open mind to try something new instead of sticking with all of the old stuff, we would never have gotten off the ground. And we owe a big thanks to all of the people who have supported our crazy idea and spread the word with good old-fashioned word of mouth. It is amazing to me how many people really want to help other people achieve their dreams. They all know what you are up against and truly want to help. I just hope we get to the point where we can give something back to all the people who gave so much support to us here at Sauce Gone Wild.